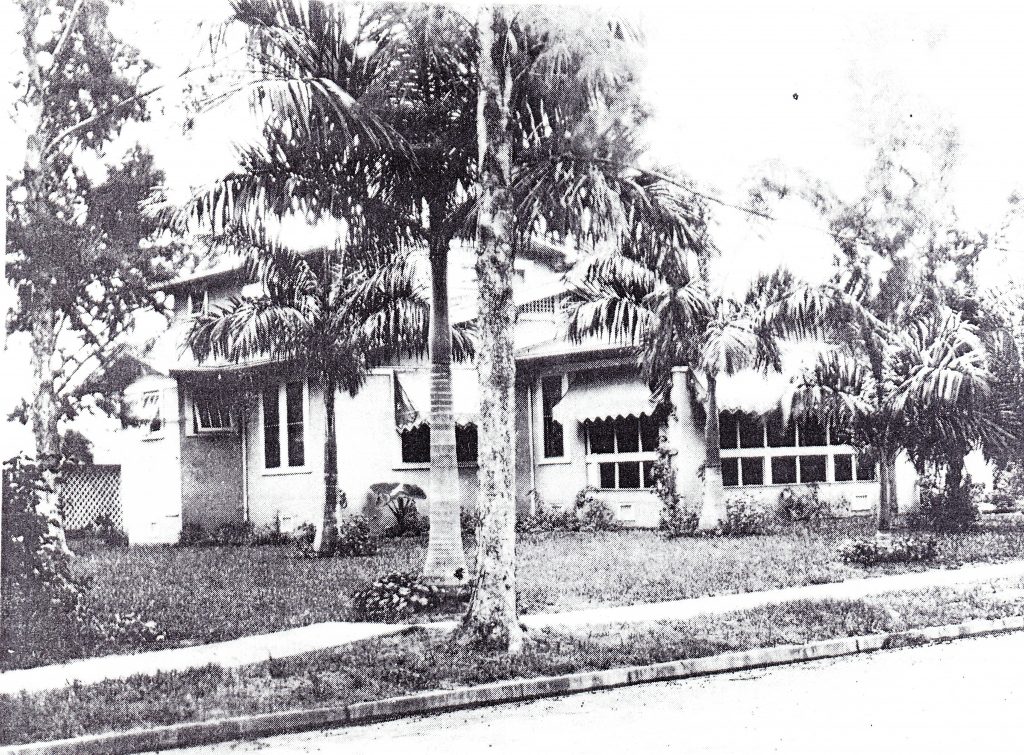 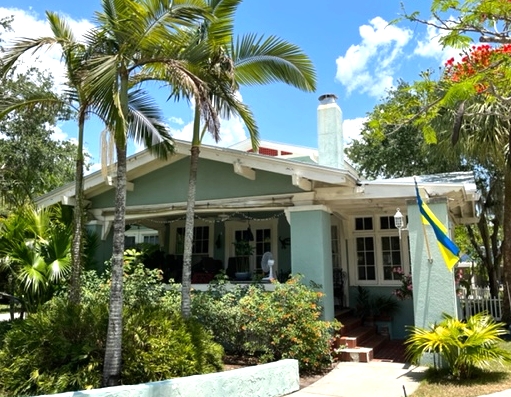 This style of Craftsman home has been nick-named the “Airplane” because of the recessed second floor that appears to “fly” under its broad roof eaves.  The house is almost identical to the other “Airplane” Craftsman home located nearby at 2781 Rhode Island Avenue.  The stucco piers of the front porch are echoed in the handsome stucco and wrought iron fence around the property.  The parcel’s location on Billy’s Creek marked it as one of the most exclusive locations in the neighborhood when the house was constructed in 1923 for Mary Florence “Flossie” Hill.

Flossie Hill and her mother, also named Mary Florence Hill, came to Fort Myers from Alabama when Flossie was a young girl.  Both women were truly pioneers in early Fort Myers and respected members of the community throughout their lives.  Mrs. Hill, who was widowed at age 28, came to Fort Myers after the death of her husband and established the Hill House Hotel in 1887.  The business began as a boarding house at the corner of Lee and First Streets, then soon became a successful hotel occupied by many long-term residents and by prominent visitors.  Mrs. Hill, and then Flossie, managed the hotel until it was purchased in 1918 by W.A. Franklin, who constructed an eight-story addition to hotel and renamed it the Franklin Arms Hotel, the city’s first sky-scraper.

In 1905, Miss Hill founded M. Flossie Hill Company, which sold women’s and children’s clothing, as well as fabric, linens and other dry goods in a her store located at 225 First Street.  For more than 50 years, the News-Press was filled with news of what Flossie Hill was doing – her buying trips to New York, shipments of the latest fabrics, store events, her support of the library and the new Women’s Business and Professional Club.  She was a gifted promoter!

On June 25, 1921, Miss Hill purchased this parcel for $1,800 from Dean Development Company, subject to a restriction that any house built there cost at least $3,500.  In May 1923, the News-Press reported that her architect (Francis J. Kennard of Tampa) was visiting Fort Myers.  In June 1923, the newspaper reported that her contractor (O.J. Dorwin) would be starting the house soon.  In October 1923, it reported that the “handsome” home was almost completed.  Even Flossie’s new house was big news!

Miss Hill and her mother occupied this home until her mother’s death in 1934 at age 82.  Shortly afterwards, Miss Hill moved to a home at 1520 Lee Street and rented out her house on Palm Avenue.  In July 1947, she finally sold the residence to William D. and Jewell N. Bogue for $16,500.

From the day her store opened in 1905 until two days before her death on September 27, 1956, Miss Hill managed her store on First Street.  In her will, she bequeathed 100 percent of the stock in her store to the nine employees who had worked in the store for ten years or more and made numerous charitable donations.