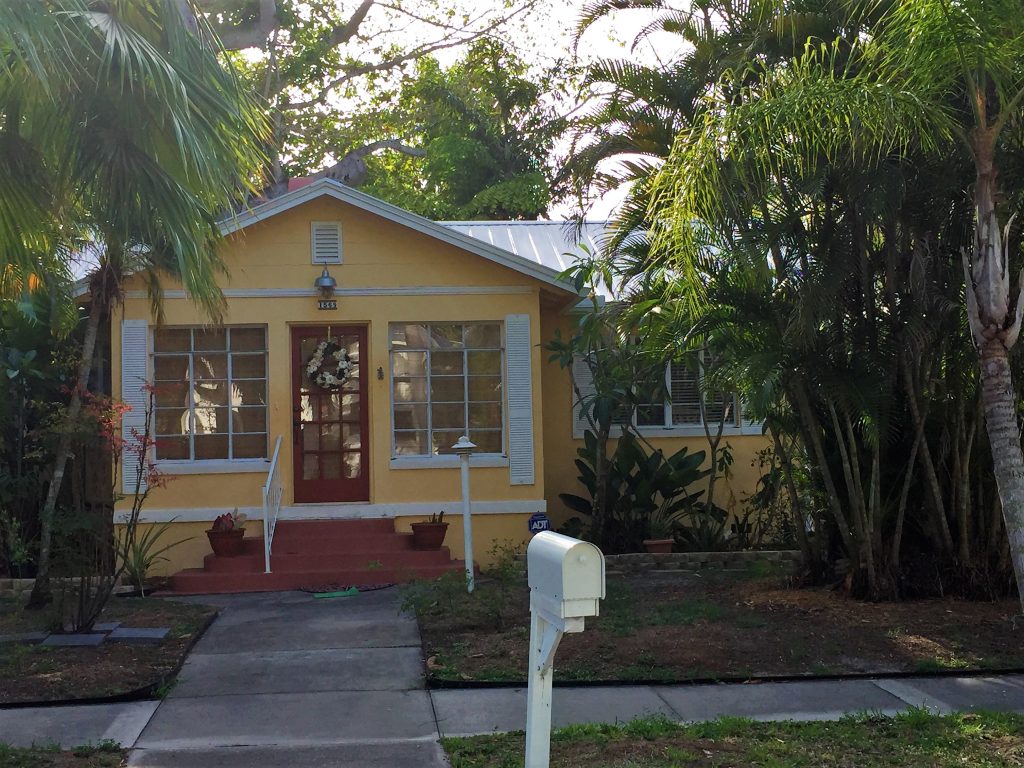 This stucco-sided cottage at the corner of Providence and Cranford represents a transitional period before the construction of ranch-style homes became the predominant style for new home construction.  The front-facing gable and window shutters look backwards to more traditional architectural styles, but the more horizontal profile and large window panels look forward to the ranch era.

On March 30, 1920, Dean Development Corporation sold this parcel to Charles W. Turner of St. Paul, Minnesota, for $1,615, subject to a restriction that any home built there cost at least $3,500.  The legal description of the property was in metes and bounds, since the Dean’s Subdivision map had not yet been recorded.  The parcel was sold and re-sold a number of times, but remained a vacant lot until it was sold to Roy Stanley Frizzell and Sarah Thompson Frizzell on Sept. 9, 1946.

Mr. Frizzell, born in 1907, to an Alabama farming family, came to Charlotte County in 1923, joining his older brother by 17 years, Arthur C. Frizzell, who was already a success in the lumber and real estate business.  By 1930, he and Sarah, born in 1907 near Blountstown on the Florida panhandle, were married and had a young son, William Frizzell.  Sarah held various jobs in Arthur’s business while Roy took positions as manager of a grocery store, a service station and a hotel in Punta Gorda.  He also worked in the family lumber business, which took him to all parts of Lee, Collier, Hendry and Charlotte Counties.

In 1945, Roy announced in the News-Press that he was retiring from the lumber business and was opening Frizzell Hardware & Supply Company at the corner of Second and Hendry Streets.  Both he and Sarah worked at the hardware store, while Roy also had an active real estate business.

In 1947, the family moved into this cottage, which faced Cranford Avenue but had an official address of 39 Providence Street.  By then, their only child, William, had enrolled in Georgia Tech and would obtain a degree in architecture, then go on to design many of the public school buildings in Lee County, the News-Press building and other projects.

The Frizzells sold this cottage in 1950 for $13,000 to an Ohio couple, Robert and Mabel Karch, and moved to a newly constructed ranch home on El Prado Avenue.  In 1956, Mr. Frizzell decided to sell his hardware business and become the local Ford, Lincoln and Mercury dealer, a career brought short by his untimely death in 1958.  Mrs. Frizzell remarried and died in 1993 at age 85.