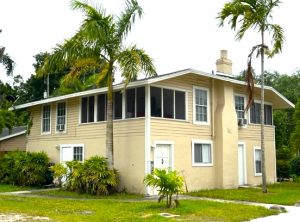 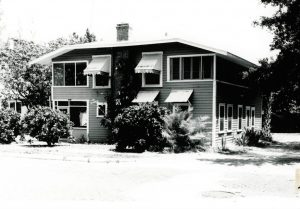 This two-story structure was proudly announced on August 9, 1922, in the News-Press as follows:

“Attracting a good deal of attention because of its novel construction is the attractive new dwelling-garage of John Brennan, that is being built at Evans and Michigan avenues.  It is two stories high and will be ready for occupancy next week.

“The structure has compartments for three automobiles and on the first floor is a shower bath.  The second story comprising large and airy rooms is flanked on the north and south sides by large screened-in sleeping porches.  A feature of construction is a good looking fire place in the commodious living room.

“The dwelling presents a pleasing appearance.  It was designed and is being built by Mr. Brennan who is a contractor and builder of many years experience.”

This parcel is one of 366 lots (each one 50 wide and 150 deep) in Evans Addition, one of the earliest Fort Myers subdivision – so old that the subdivision plat was recorded in Key West, once the county seat of Monroe County of which Fort Myers was once a part.  In 1905, the plat was re-recorded in Fort Myers after Lee County was formed from the northern portion of Monroe County.  In 1913, all the lots in Evans Addition on the northerly side of Michigan were purchased for $6,000 by The Carl F. Roberts Company, which conveyed this lot to John T. Brennan for $500, as well as two adjacent lots on Michigan Avenue.

Mr. Brennan, who had been a carpenter and cabinetmaker in Michigan, and his wife Grace lived in Fort Myers the rest of their lives, but often returned to Michigan for extended visits during the summer months.  He never sold this property at 1615 Evans during his lifetime and, according to the 1935 city directory, was operating his contracting business from this address.  This property was not sold until after Mr. Brennan’s death in 1944.  Mrs. Brennan remained very involved in community and church activities – including spearheading the fundraising drive for the organ at Edison Congregational Church – until her death in 1967.