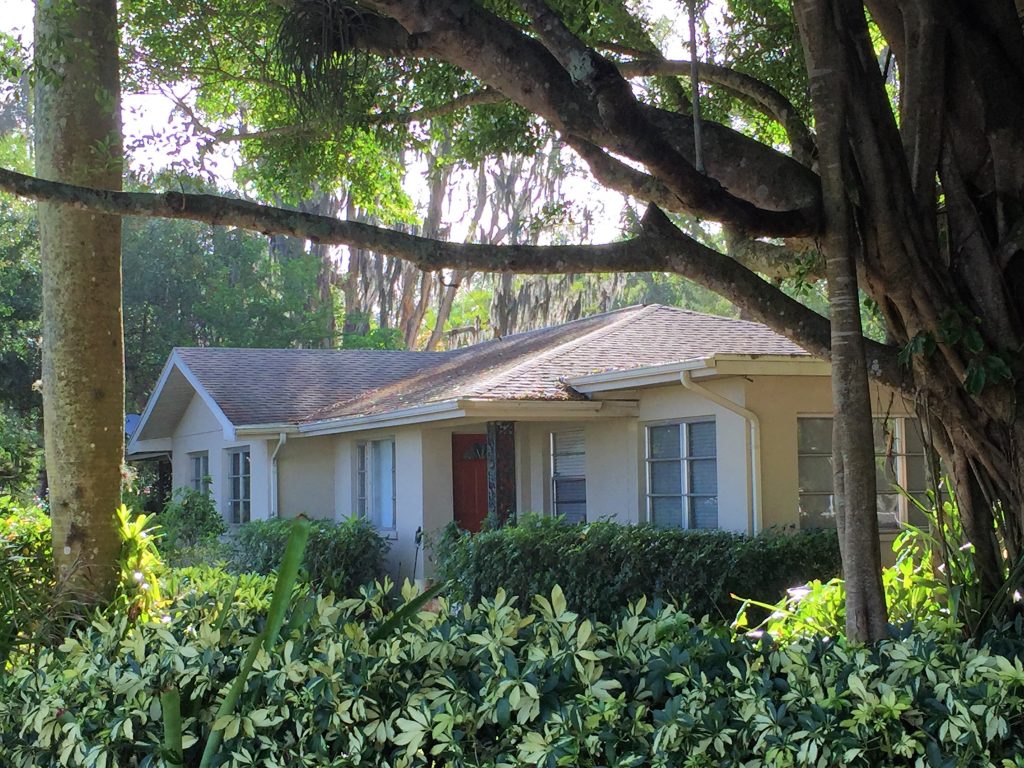 This mid-century modern duplex includes the many popular features of the ranch homes being constructed throughout Fort Myers during the 1950’s:  a horizontal profile under a low-slung roof, stucco siding, large jalousie windows and unimposing front doors flanked with modest wrought iron columns.

The home faces First Street, but the driveways and carport enter onto Providence Street.  The landscaping surrounding the home was awarded the City of Fort Myers Beautification Award in June 2004.

Herbert F. Bryant, who had just arrived in Fort Myers from Indiana, purchased this parcel for $4,000 on December 24, 1955, and immediately obtained a building permit to construct a “CBS” (concrete block stucco) home on the parcel at an estimated cost of $17,000.

The parcel had been vacant for many years and was one of many vacant lots that John M. Dean transferred to his wife, Annie Powell Dean.  It was conveyed to her on December 24, 1924, with a building restriction that a house costing at least $7,500 be constructed on the property.  After Dean’s death in 1938, Mrs. Dean moved into the Morgan Hotel downtown and did not sell the lots until the early 1950’s.  She sold this lot in 1952 to a local real estate developer, and the lot was sold once again before being bought by the Bryants.

Herbert F. Bryant was one of 17 children born to a farming family, Carl and Nola Bryant of Campbellsville, Kentucky.  He married Alta Marie Tory of Missouri and briefly moved in with her parents and worked as a laborer on the Tory family farm, according to the 1930 census.  The Bryants left the farming life and moved to Michigan City, Indiana, where Mr. Bryant worked as a debt collector for L.B. Price Merchandising Company.

In 1954, when Mr. and Mrs. Bryant were both 45 years old, the couple moved to Fort Myers.  Mr. Bryant became active in the local real estate market, buying and selling several homes and parcels of land, as well as purchasing the Floridan Motel, a 20-unit motel in Cleveland Avenue, and selling it seven weeks later.  He also worked as a painter for local building contractor C.E. Ross and others.