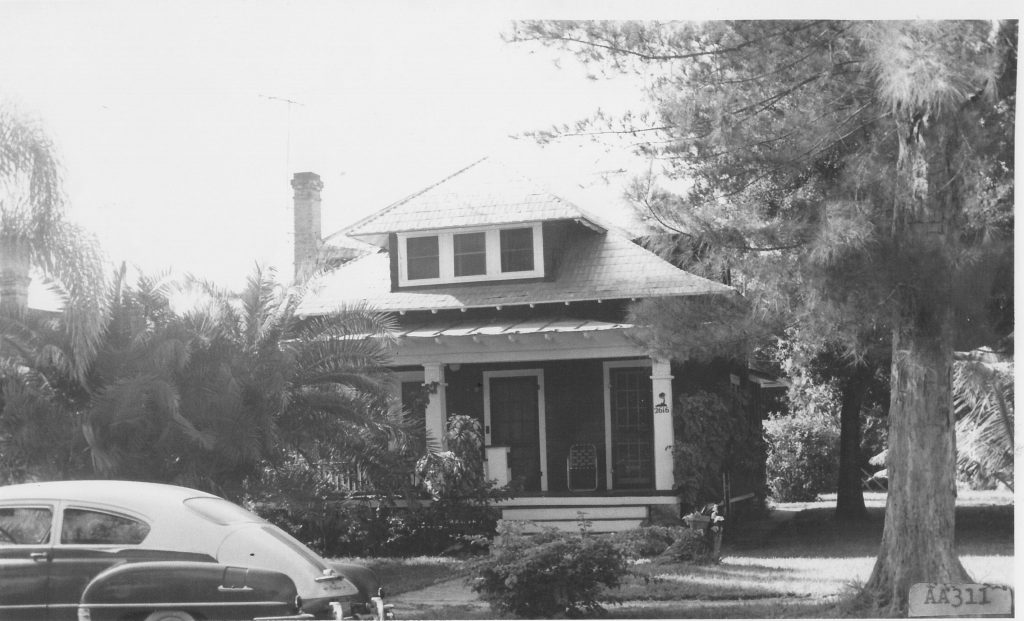 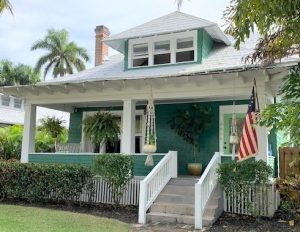 This two-story Craftsman home has a metal roof and wood shake siding.  Its central doorway is flanked by three windows on each side, and this cluster of three windows is repeated in the attic gable.  This home, like all those on the south side of Michigan Avenue, was not part of the 1920 Dean’s Subdivision, but part of an early subdivision known as “Evan’s Addition.”

In 1913, The Carl F. Roberts Company purchased 46 of the Evans Addition lots, including this lot and all other lots in Dean Park on the southerly side of Michigan Avenue.  In November 1919, the company sold this parcel to John T. Brennan for $500, subject to a building restriction that a home costing at least $1,000 be built on the property.  On March 12, 1921, Mr. Brennan, a general contractor who lived next door at 2610 Michigan Avenue, sold the new house to Alvin and Sylvia Gorton.  This event was reported in the News-Press in July 1921 as follows:  “Alvin Gorton is having a beautiful two-story dwelling built on his property on Michigan Avenue by John Brennan.”

Alvin Gorton had sold a meat market in Chicago and come to North Fort Myers in 1913 to homestead on land in the Bayshore area, according to a 1963 article in the News-Press.  He told the newspaper that he had pitched a tent for his wife and three daughters to live in until their house could be built on the land.  The 1923 city directory showed the Gortons to be living on Michigan Avenue and Mr. Gorton’s occupation as a “grower, buyer and shipper of Florida vegetables, fruits and melons.”  By 1925, Mr. Gorton had become a realtor, as had almost everyone during the Florida real estate boom.

In 1928, Mr. Gorton began his 28 years of service as a Lee County Commissioner and cited his proudest accomplishment as his involvement in the construction of the bridge to Sanibel.  In retirement, he devoted himself to numerous civic activities and the 350-400 orchids he grew at his home, now on Hough Street, until his death in 1968.

Mr. Gorton was also on hand to see the romance between his step-daughter, Ethel Scholten, and Florida native Claude Lee Stroup.  The Stroups married in 1919 and purchased the property next door at 2622 Michigan Avenue on March 15, 1921, just 3 days after the Gortons purchased this property at 2616 Michigan.  Mr. Gorton and Mr. Stroup joined forces for quite a few business ventures, including a dealership for Maxwell, Chalmers and Stutz automobiles.