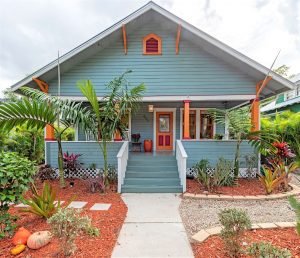 The bungalow includes classic Craftsman-style features:  a front porch and centered front door, with double-hung windows on either side of the door.  Its second floor dormers create light and space for the upstairs bedroom.

In 1913, The Carl F. Roberts Company purchased 46 of the Evans Addition lots, including this parcel and all other lots in Dean Park on the southerly side of Michigan Avenue.  In November 1919, the Carl F. Roberts Company sold this parcel to Fred N. Loomis and Kate Julia Loomis for $500, subject to a building restriction that any house built on the property must cost at least $1,000.

On March 15, 1921, the property was sold to Claude and Ethel Stroup, a Florida native, and Ethel Scholten, daughter of Sylvia Scholten Gorton, who lived right next door at 2616 Michigan Avenue.  The Gortons had purchased their property just three days before on March 12, 1921.  Both the Stroup house and the Gorton homes are shown on the 1922 Sanford Insurance Company map.  The Stroups lived here until 1925, when they sold the home to Joseph Chambless and made him a $4,500 mortgage loan to finance this purchase.

Claude Lee Stroup was the son of Larkin Moses Stroup, who came to Fort Myers 1888 after walking to Florida from his native Georgia.  After homesteading land along the Peace River, he brought his bride and young daughter to Fort Myers, where he was elected marshall and eventually police chief.  His son, Claude, was born in Fort Myers in 1895, and owned and operated automobile and truck dealerships, including a joint venture for the Maxwell, Chalmers and Stutz automobile dealership with his wife’s step-father and next-door neighbor, Alvin Gorton.  On June 16, 1922, the News-Press reported:

“Mr. Stroup has just returned from Tampa with a nifty looking 1923 Model Maxwell touring car which sells here delivered at $1,050 (easy terms if desired).  He said today that he will be pleased to demonstrate this classy machine to anyone interested in a ‘better’ automobile.”

After Claude Stroup’s untimely death in 1938 at age 43, Ethel Stroup began a career in law enforcement, first working as a matron in the Lee County jail, then serving as Lee County Deputy Sheriff before her death in 1969.