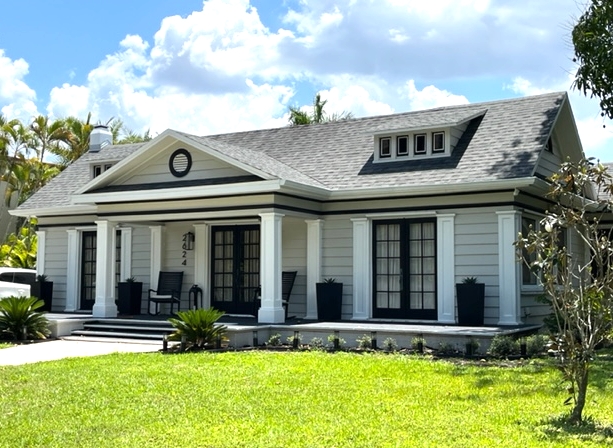 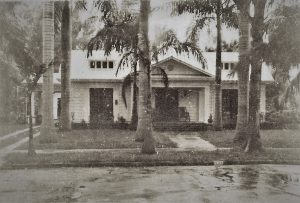 The one-story house is perfectly symmetrical, with a columned portico announcing the entrance.  The wings on each side of the front door feature French doors, and the second-floor dormers and substantial square columns supporting the portico hint at the Craftsman influence.  The interior of the home is spacious, with the front door entering directly into the living room.  It has high ceilings, wood floors and decorative moldings that are characteristic of Dean Park homes.

In 1924, the Dean Development Company sold this empty parcel for $1,950 to Lucias C. Curtright, a real estate developer who built several homes in Dean Park, subject to a restriction that house costing at least $4,000 be built on the property.  By 1925, this elegant home – with its combination of Craftsman detail and federal styles – was constructed and sold for $11,250 to Willson H. Cralle.

Mr. Cralle, a native of Virginia, and his wife, Ruth, came to Fort Myers in the 1920’s.  He made his living in the wholesale and retail lumber business, traveling between Pittsburg and his company’s southern lumber mills.  The Cralles had three daughters, Cornelia, Ruth and Harriet.  Cornelia Cralle would eventually inherit this home and lived in Dean Park until the late 1990’s.