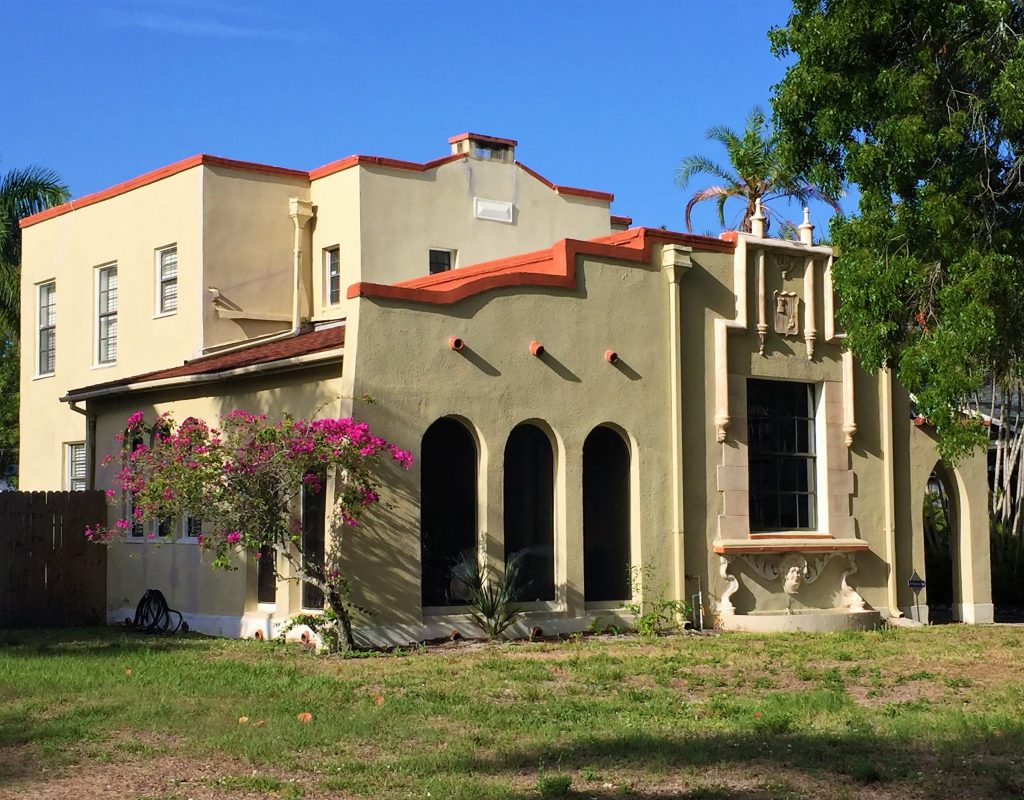 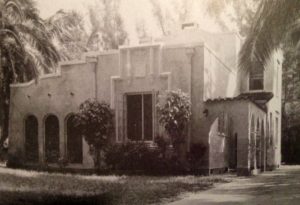 The Evans home is one of three Spanish revival homes in Dean Park.  Its Spanish revival features include the series of arches along the entrance walkway and around the screened porch front porch.  It stucco siding is capped with contrasting terra cotta trim.  Of special interest is the fountain with the face of Neptune, god of the sea, incorporated into the front façade of the home.  Inside, the large living room has 12-foot ceilings and dramatic arched windows.

This home remained in the Evans family for nearly 30 years.  The parcel of land was purchased on April 7, 1924, from Dean Development Company by Edward H. Evans and Mabel E. Evans for $1,891, subject to a covenant that any home built on the lot must cost at least $4,000.  Lee County tax records indicate this house was built in 1925, but the 1925 City directory does not list the property.

The 1927 City directory shows this house as the residence of Mr. Evans’ father, Edward L. Evans, and his mother, Carrie Belle Hendry Evans.  A deed transferring this property from the son (Edward H.) to the father (Edward L.) cannot be located.  But in any event, the senior Mr. Evans resided there until his death in 1934, and Carrie Belle Evans resided there until she sold the house in 1954.

Edward L. Evans came to Fort Myers from New Orleans in 1881 on a freighter, “Lily White,” owned by H.L. Roan, who operated a general store at the corner of First and Hendry Streets.  Mr. Evans became manager of the store and, within a year, bought the business.  At the time, the only streets were cow paths and the cattle trade with Cuba was the primary business in Fort Myers.  Forming a partnership with Harvie E. Heitman, they established a hardware and sporting goods store managed by Mr. Evans for many years.  Mr. Evans also served on the City Council and as Mayor of Fort Myers for one term, 1899-1900.

In 1887, he married Carrie Belle Hendry, 9 years his junior and the daughter of Captain Francis A. Hendry, a cattleman and one of the first settlers of Fort Myers.  The couple was married at the Hendry home on the Caloosahatchee, a site that later became the Royal Palm Hotel.

The couple was married for 47 years.  Their children included Edward {“Ted”)  Hendry Evans, operated Evans Pharmacy; Rossie Lewis Hendry, who married Frank Alderman and lived nearby on First Street, and Ellen Mary Evans, who married Harry C. Stucky in 1920 and lived next door at 2644 Providence Street until her death in 1949.  Another daughter, Alta Evans, who did not marry, and lived next door with her sister Ellen.  Alta continued to reside next door until her death in 1986.  The two families were so close that a small path ran between the Evans home and the Stuckey home next door.  The stones of this small path can still be seen.

Mr. Edward L. Evans died in 1934 at age 75, and Carrie Belle Evans lived until she was 97.  Her obituary recounted her long and colorful life, including playing the piano for Thomas Alva Edison at “Seminole Lodge” and being the first woman in Fort Myers to drive a car, a Reo Runabout.