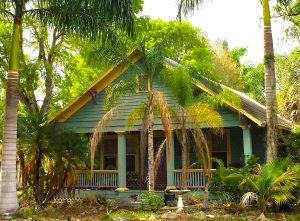 This bungalow, with its columned front porch, includes the classic Craftsman front porch and exposed roof rafters.  Its first owner was George W. Capling, a florist and landscape architect, who lived there with his extended family from 1921 to 1925.

In 1920, Dean Development Company sold this lot to Mr. George W. Capling for a stated consideration of $100, with a building restriction that a house costing at least $2,000 be built on the property.  By 1921, Mr. Capling, a widower, and his three adult children had moved into this house on Michigan, as shown in the 1921 city directory.  And by May 1925, Mr. Capling had sold this house to Ora and Grace Sicks for $6,000.  The Florida real estate boom was in full swing!

Mr. Capling, who immigrated from England as a young man, and his wife, Florence, were early settlers of Arcadia, Florida, where their three children were born.  By 1910, the family had moved to Fort Myers, first living on McGregor Boulevard.  After Mrs. Capling’s untimely death in 1915 at age 46, the family moved to a home on Evans Avenue, then into this bungalow on Michigan as soon as it was completed.

The Capling family definitely filled this 3-bedroom, 1039-square-foot home.  In 1921, the household included not only Mr. Capling, age 73, but his eldest son, George F. Capling, 26, who had begun his career as a fishing guide on the Caloosahatchee; Charles C. Capling, 24, who was a boat captain, and his daughter Frances, 21.  When Frances married boat captain John Mitchell Barnes in April 1922, Mr. Barnes and a new baby, Lois Barnes, became part of the household.

Fortunately, both sons soon married and moved out, while the senior Mr. Capling, his daughter Frances (widowed in 1930) and granddaughter Lois continued to live together in a nearby home further east on Michigan Avenue until Mr. Capling’s death in 1944 at age 93.