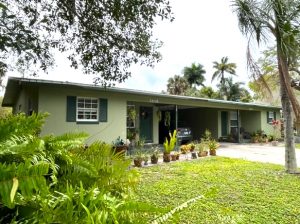 Like its its neighbor on 2668 Michigan, this ranch duplex features horizontal lines under a low-slung roof.  It incorporates two carport areas in the enclosed area between the two units.  The front doors are inconspicuous, which was typical of the ranch style.

The building was constructed in 1957, according to Lee County tax records.  The city directory for that year shows this property as “vacant,” and it seems likely that this duplex was built as an investment, with the property occupied by tenants.

This property, like all the Dean Park homes on the southerly side of Michigan Avenue, is part of Evans Addition, a subdivision plat recorded by Mayor James Evans, first in Key West (which was originally the county seat for Fort Myers when it was part of Monroe County), then in 1905 with the Lee County Clerk.

In 1913, The Carl F. Roberts Company purchased 46 of the Evans Addition lots, including this parcel and all other lots in Dean Park on the southerly side of Michigan Avenue.  On May 24, 1921, The Carl F. Roberts Company sold this property to Wilhelm Reiter of Lee County for $600, subject to a building restriction that a house costing at least $1,000 be built on the parcel.