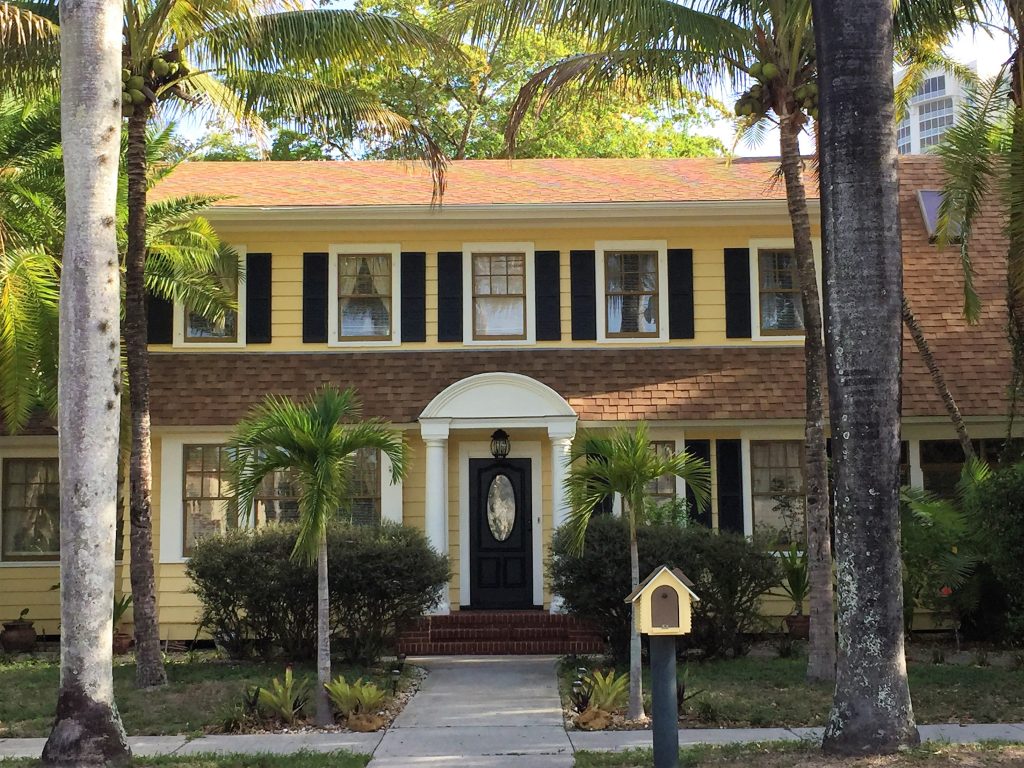 This Colonial revival style home features a Dutch gambrel roof, with a matching cottage at the rear.  In the 1920’s, the Colonial revival style and an architectural nostalgia for this early American era was in full flower.  The center doorway topped by a columned portico, the double-hung multi-light windows and the window shutters are all hallmarks of this popular style.

During the Florida real estate boom of the early 1920’s, homes in Dean Park changed hands frequently as owners bought and sold to make a quick profit.  This home was particularly active in this game of real estate musical chairs.  In August 1922, Lucius C. Curtright, President of Fort Myers Real Estate, purchased this parcel from Dean Development Company for $1,500, subject to a covenant that any home built on the parcel cost at least $4,000.  By January 1924, Mr. Curtright had constructed a house on the parcel and sold it to J.C. Nowling for $10,500.  In July 1925, Mr. Nowling sold the home to John W. Hendry.  In 1928, Mr. Hendry sold the home back to Mr. Curtright and his wife, Jessie, who lived there for the next 30 years.

Lucius Curtright (1888-1965) was an Alabama native who came to Fort Myers in 1921.  He promptly founded the Fort Myers Real Estate Company and the Fort Myers Insurance Company.  He became a prominent developer of single family homes (including 2654 Providence Street in Dean Park) and many significant local buildings such as John Dean’s Morgan Hotel and the Kress Building.

He was also a key figure in the early Fort Myers business community and – along with many other of his Dean Park neighbors – was a founding member of the Lee County AAA Club to promote tourism and good roads in Fort Myers and the Kiwanis Club.  Jessie Bonner Curtright (1889-1965), also from Alabama, served throughout her life as Vice President of the Fort Myers Real Estate Company and was extremely active on local civic affairs, including the Dean Park Garden Club.  In 1958, the couple, who did not have children, moved to a new one-story ranch at 1130 Braman Avenue.  Both died in 1965 within one month of each other.

When Dr. James C. Nowling and his wife, Pearl B. Nowling, purchased this home, the News-Press announced the move on January 18, 1924:  “J.C. Nowling and family have moved into a new home, 1015 Providence Street, Dean Park, recently purchased of L.C. Curtright.”  Dr. Nowling was born in 1888 in Santa Rosa, Florida.  He and Pearl married in Santa Rosa, and the couple was still living there in 1920.  In July 1923, the Fort Myers News-Press announced that Dr. Nowling, a graduate of Emory University, was opening up his practice in Fort Myers.  Like many Fort Myers residents of the 1920’s, Dr. Nowling’s second career was real estate, as reflected in his 64 real estate transactions recorded on the land records in the late 1920’s.  By 1930, Dr. Nowling and his family had moved to Hendry, Florida.  From 1935 until his death in 1966, he lived in Palm Beach, Florida.

John W. Hendry, grandson of cattleman and early Fort Myers settler Francis A. Hendry,  expanded the parcel into a “double lot” by also purchasing most of the parcel next door (Lot 8).  The Hendry family lived in the home three years before selling the property back to the Curtrights.