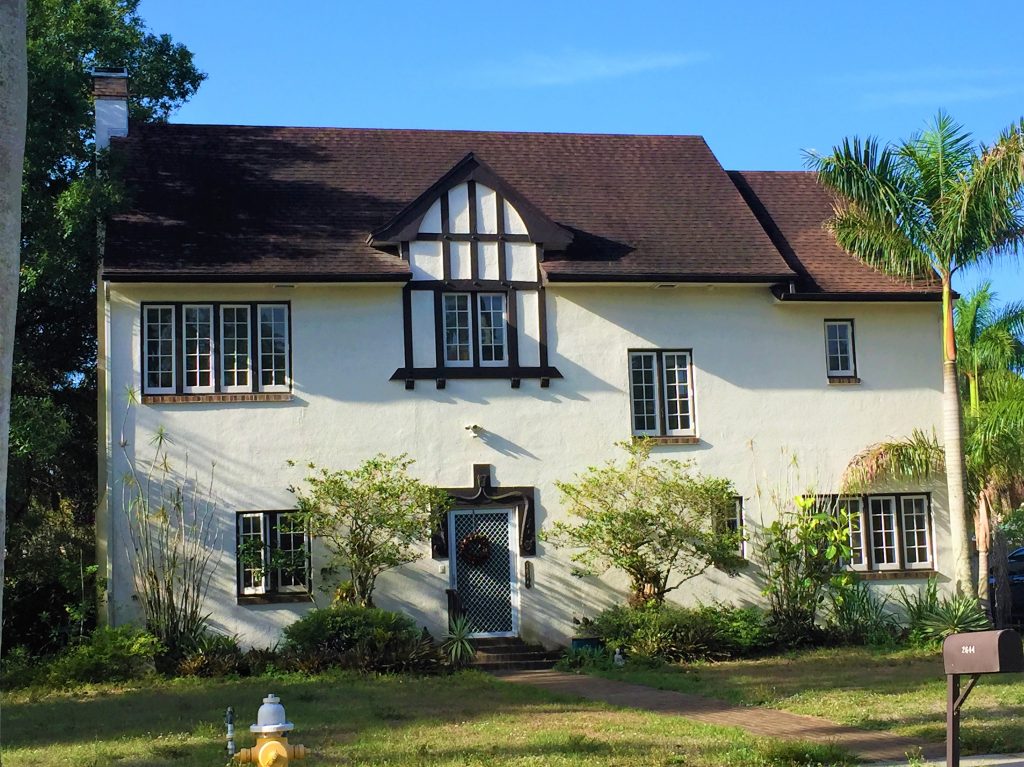 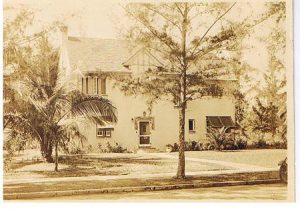 This Tudor Revival home features the exposed timbers, stucco siding and paned casement windows that are the hallmarks of this English style so popular in the 1920’s.  With 2,340 square feet, it is one of the larger homes in Dean Park, with a spacious living room that extends across the width of the house, a fireplace and grand staircase.

The home’s original owner, Harry C. Stucky, first came to Dean Park in 1920, when he and his wife Ellen moved into their new bungalow at 2675 Michigan Avenue.  But they soon outgrew this one-story bungalow and moved into this more spacious home of Providence Street, as was befitting his status as co-owner of the prominent Fort Myers furniture company, Robb & Stucky.  His business partner, Virgil C. Robb, has just moved into a nearby home at 2721 Rhode Island Avenue, which also reflected an admiration for an English style – the English Arts & Crafts movement.

Born in Kentucky in 1891, Mr. Stucky arrived in Fort Myers by 1920, when he is shown as a “roomer” on the 1920 census.  He had the good fortune to marry Ellen Mary Evans, granddaughter of Capt. Francis A. Hendry, a cattleman and one of the first settlers in Fort Myers.  Ellen Evans was one of five children of Edward L. Evans and Carrie Belle Evans, who lived next door to the Stuckys 2632 Providence Street.  One of Ellen’s sisters, Alta Evans, never married had moved into the Stucky home by 1940, as shown on the 1940 census.  Alta lived at this house until her death in 1986 at age 94.  The two sisters’ mother, Carrie Belle Evans, was equally long-lived and resided next door at 2632 Providence Street until she sold this home in 1954 at age 85.

On April 18, 1922, Dean Development Company sold this parcel to Harry C. Stucky for $1,800, subject to a restriction that any home built there cost at least $4,000.  The architect is unknown, but both this home and the home built for his business partner Virgil C. Robb show a decided preference for the English style, this house as a Tudor revival and Mr. Robb’s house in the English cottage style.