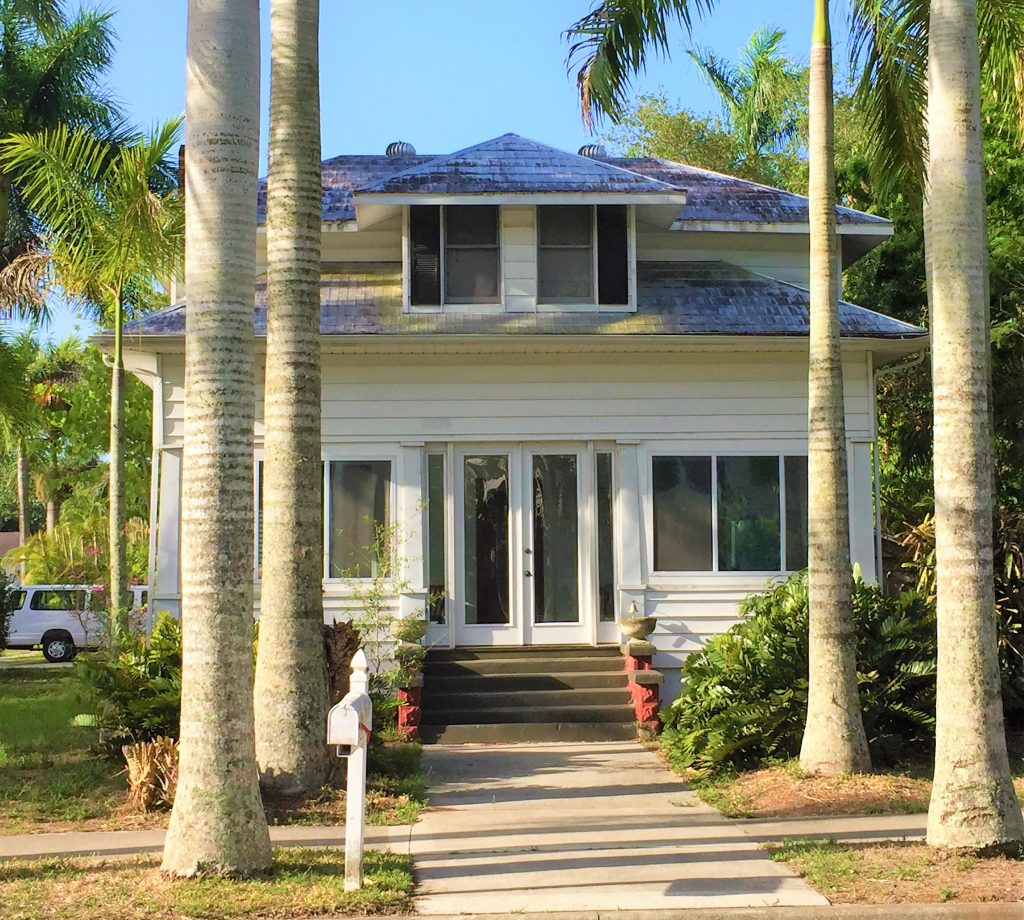 This two-story home, built for Marvin F. Pixton and his wife Mabel, appears to be the first home built in Dean Park.  A News-Press article dated December 18, 1916, announces the purchase of “one of the beautiful lots in John M. Dean’s east side addition on Providence Street east of M.F. Pixton’s Place.”

The home contains elements of the Craftsman style as well as those of the “American Foursquare” style that was popular from the mid-1890’s until the 1930’s.  Craftsman details include the deeply overhanging eaves, a centered dormer emerging from the second-floor roof, and a front porch (now enclosed) across the entire front of the house.  At the same time, the hipped roof and two stories are a reminiscent of the “American Foursquare” style.  Inside, the home’s oak woodwork around the living room fireplace and elsewhere is an outstanding example of Craftsman workmanship.

On May 5, 1916, the home was sold to Marvin F. Pixton & Mabel Pixton, who had recently come to Fort Myers from Tampa, where Mr. Pixton was an assistant bank cashier.  In Fort Myers, Mr. Pixton set about establishing his career as an “Auditor and Public Accountant,” according to his regular ads in the News-Press.  He also loved choral singing, and newspaper stories show he was an enthusiastic member of the Methodist Church choir and the Morse Choral Union (of which he was treasurer) and a volunteer soloist for Elks Club events.

In February 1917, Mrs. Pixton hosted a Valentine’s Day party for 500 people at her “pretty bungalow on Providence Street,” the News-Pressreported.  And on Halloween of that year, Mrs. Pixton pulled out all the stops with a party featuring “vari-colored lights streaming from every corner of the house and grounds” and marching the guests “out the back way through a graveyard that containing newly made graves.”

Mr. Pixton’s older brother, drug store owned James Pixton, also lived in Fort Myers and may have inspired the younger Mr. Pixton to launch his accounting business here.  But in 1919, the Pixtons decided to relocate to Atlanta, where Marvin Pixton worked for many years, eventually becoming a manager at the accounting firm of Peat Marwick Mitchell & Company.

In May 1919, the Pixtons sold their home in Dean Park to Kate C. Roberts, who quickly re-sold it to Arthur Travers G. Parkinson and his wife, Penelope D. Parkinson.  The 1920 census listed Mr. Parkinson’s occupation as “orange grower.  He immigrated to the United States from England in 1881 at age 41. His wife, Penelope, was 33 years younger and lived at this address until 1968.