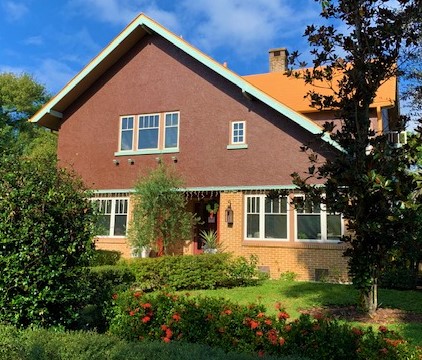 This two-story home and its neighbor at 2721 Rhode Island Avenue, the Robb House, feature architectural details that reflect the English origins of the Craftsman style.  In this home, they include the contrasting exterior finishes and Tudor revival details.  Inside, the living spaces feature ornate molding, custom French doors, an oak balustrade at the central stair and imported tiles on the hearth.

Mr. McCallum exceeded that $3,500 figure by far.  A newspaper story on May 27, 1924, reported that contractor O.J. Darwin “has erected a tool shed for his operations on a large residence for William A. McCallum of Cinncinati to be made of brick and stucco at an approximate cost of $16,000.”

Born in Ohio in 1852, Mr. McCallum was general manager of the Electric Railway Equipment Company of Cincinnati.  He was a bachelor and began spending the winters in Dean Park at age 72.  The News-Press reported periodic visits from his brother, Neil McCallum, another bachelor.  Mr. McCallum died at his home in Dean Park at age 94 and was buried in his native Cincinatti.