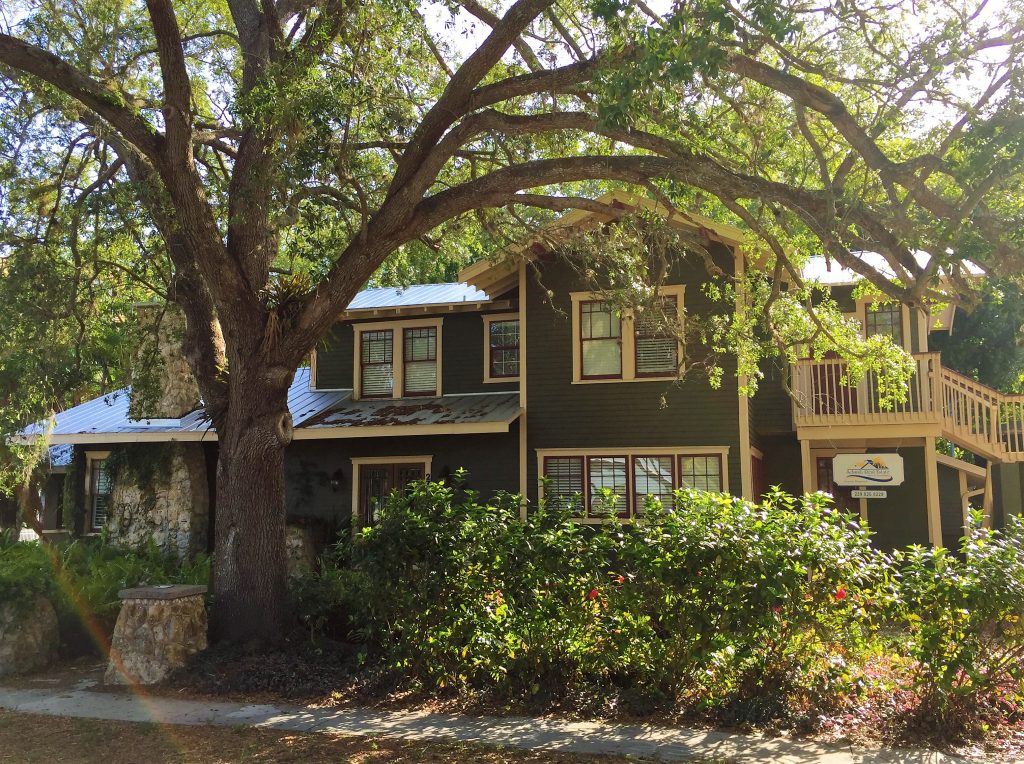 In the 1920’s, First Street was called “Millionaires’ Row” because of the many grand homes built along this prestigious, palm-lined street.  This home, built for Dr. Gordon F. Henry and Esther C. Henry in 1919, was one of the largest homes constructed in Dean Park, and its Craftsman details included the tapered stone columns that were the hallmark of this style, exposed roof rafters, wide eaves and expansive porches.

On March 23, 1918, this Dean Development Company conveyed this parcel at the corner of First and Cranford Streets to Gordon F. Henry of Lee County for $3,500, subject to a restriction that any house built there cost at least $2,500.  This property was conveyed using a metes and bounds description, since the Dean’s Subdivision map was not recorded until 1920.  The Henrys bought the parcel with a purchase-money mortgage from Dean Development Company and funded construction of the home with a mortgage loan from Charles W. Turner.

Dr. George Fuller Henry, born in 1886 in Tennessee, was the son of a physician, Dr. George P. Henry.  His father practiced for more than 20 years in Nashville.  By 1900, the family had moved to DeFuniak Springs in the Florida panhandle, where the elder Dr. Henry was employed as the physician for the local poorhouse.  His parents, George and his four siblings all resided in quarters located at the poorhouse, according to the 1900 census.

By March 1912, Dr. Henry was in Fort Myers, where the News-Press reports him vacationing for a week in Useppa with a group that included his future wife, Esther (“Essie”) Lynn of Fort Myers.  They married later that year.  The 1915 Fort Myers directory shows he located his office in the Earnhardt Building and living on nearby Woodward Avenue.  He also had time to dabble in real estate and sold a truck farm in Olga for $21,000 — quite a sum then!        By 1919, the family – which included Essie and their two children – had moved into this impressive 3,480-square-foot home on First Street.  Dr. Henry also had time to dabble in real estate during his stay in Fort Myers and sold a 42-acre truck farm in Old for $21,000 in 1919, according to the News-Press.  But the Henry family did not remain in Fort Myers for long; in March 1921, they sold this house to Essie’s mother, Mary E. Lynn of Fort Myers, in consideration of her assumption of the $1,600 first mortgage and the $8,000 construction mortgage.  Then the Henrys moved to Palm Beach, where Dr. Henry resumed his medical practice (as an eye, ear, nose and throat specialist) and continued to be involved in real estate development until his death in 1957 at age 72.

In 1934, this house became the home of another well-known Fort Myers physician, Dr. William H. Grace, who lived here with his wife, Annie Lee Grace, until 1959, when they moved to a ranch home they had just built next door at 2666 First Street.