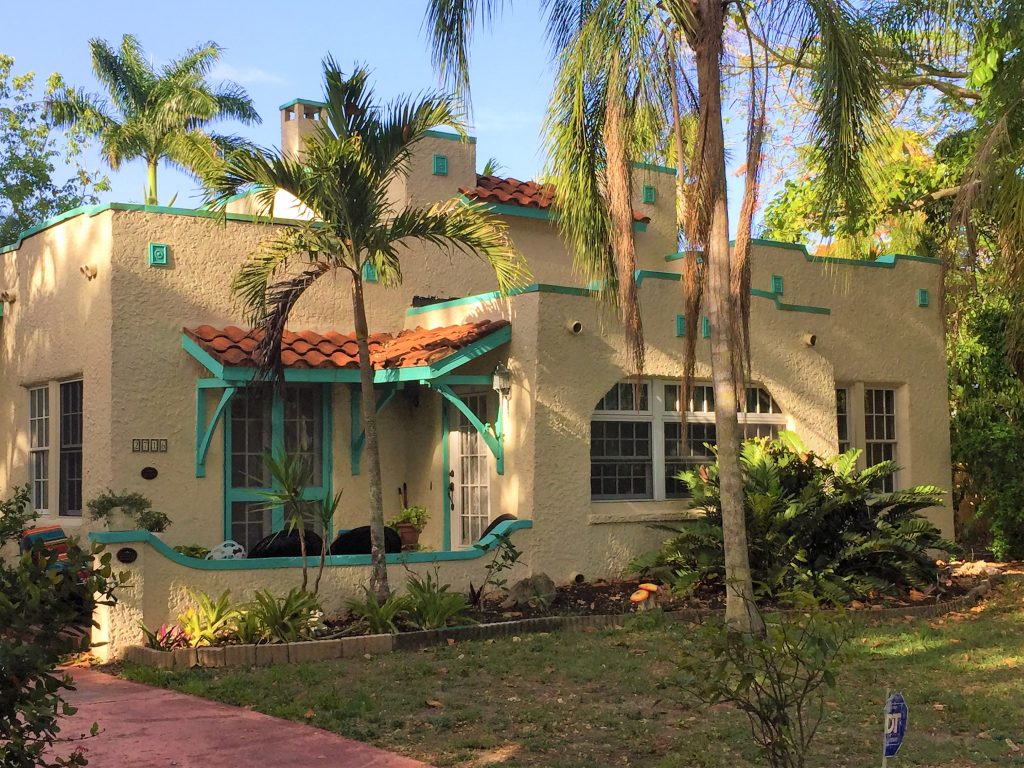 This Spanish revival home is a single-story house similar to one located at 2730 Rhode Island Avenue.  Typical of the Spanish revival style, the house features a graceful arched front porch (now enclosed) underneath a Moorish-style gable, stucco siding, exposed timbers and an entry court defined by a low cured stucco wall.  The house has mission-inspired, multi-level flat roofs with parapet walls of varying heights.  It features a variety of terra cotta, barrel-tile shed roofs over window bays and entryways, all of which accentuate the building’s complexity and asymmetry.

This stylish home was constructed for Mrs. Elizabeth S. Holmes, who moved from Michigan to Fort Myers with her husband, Frank C. Holmes, sometime after 1910.  After Mr. Holmes died in 1915, Mrs. Holmes (always known as “Lizzie”) moved to this home on Providence Street.  On June 16, 1923, Mrs. Holmes purchased the lot for this home from the Dean Development Company for $1,563.94, subject to a building restriction that any home constructed on the lot must cost at least $3,500.

The Holmes had several children, some who moved to Fort Myers with their parents and others who stayed in Michigan.  Mrs. Holmes was one of the founders of the Christian Scientist church in Fort Myers and occasionally wrote articles for the Fort Myers News-Press on religious issues.  She was visiting her family in Michigan when she died in 1928 at age 68.

Local legend has it that Al Capone stayed here while he had a new home built elsewhere in Fort Myers.  Sculptor D.J. Wilkins also lived here, and the bronze panther sculpture on Broadway was created in the back yard of this home.