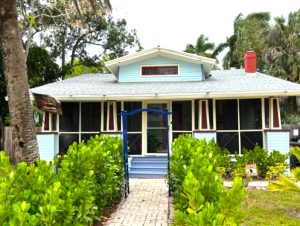 This Craftsman bungalow is one of about a dozen homes built in Dean Park by Fort Myers developer Henry C. Case.  The house includes the tapered porch columns typical of many bungalow porches and the attic dormer in the center of the roof.

Mr. Case bought this parcel on April 24, 1923, from Dean Development Company for $1,000, subject to a deed restriction that any house built on the parcel cost at least $3,500.  He constructed the bungalow in less than six months and then sold it to Maurice M. Achard and his wife, Nannie Elizabeth Achard, subject to two mortgages totaling $3,800.  The Achard family, which included his two young children, lived there until March 1925, when they sold the home to Emil W. Opitz and moved to a home of McGregor Avenue.

Mr. and Mrs. Achard, from Arkansas and Alabama respectively, first lived in Tampa where Mr. Achard worked as a commercial produce salesman.  After moving to Fort Myers, Mr. Achard worked as a salesman for Bryan, Keefe & Adams, a wholesale grocery store supplier, and became very involved in Boy Scout events with his son, Thomas.  The Achards remained in Fort Myers for the rest of their lives and are buried in Fort Myers Cemetery.