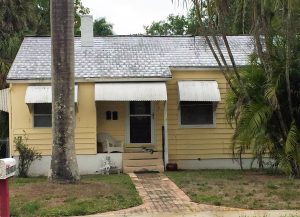 The modest cottage on this property was built in 1941 by Louis H. Furen, Jr. and his wife, Alma.  In 1925, this parcel was sold by Dean Development Company to H.C. Case for $1,200 , with a deed restriction requiring any house built on the property cost at least $1,500.  Nevertheless, the parcel remained vacant until the Furen home was constructed in 1941.

In the early 1880’s, the Furen family settled in Orange County, Florida.  Mr. Furen’s grandfather, John W. Furen, Sr., was a cabinetmaker born in Holland and first settling in West Virginia before moving south to Orange County, Florida.  The oldest son, John W. Furen, Jr., was the first in the family to move to Fort Myers, where he began a farming career around 1900 and eventually became one of the successful citrus growers and packers in the region.

Louis H. Furen, Sr. was the youngest of John W. Furen, Sr.’s nine children.  Louis Sr., his wife Alma and their young son Louis Jr. came from Orlando to Fort Myers in 1931.  From 1932 through 1940, the Furen family had their residence at the Lee County Jail, due to Mr. Furen’s position as a deputy sheriff.  When the Furens entertained, it was at the family cottage on Fort Myers Beach.

In 1941, the family moved into this new cottage on Michigan Avenue, with Louis Furen Sr. employed as a policeman and Louis Jr. joining the Coast Guard during World War II.  After the War, Louis Jr. returned home and rose to Vice President of First Federal Savings & Loan Association in Fort Myers, while still having time for his 1941 blue Chrysler and the activities of the Antique Auto Club of Fort Myers.

After Louis Sr.’s death in 1975, Alma Furen remained in this Michigan Avenue home until selling it in 1983 and moving in with Louis Jr. at his home on nearby Palm Avenue.

Louis H. Furen, Jr. became a beloved figure in Dean Park.  He lived at 1517 Palm Avenue from 1981 until his death in 2016, at age 93.  He was an active member of the Dean Park Historic District Board of Directors from the date of its formation in 1997 and, on many afternoons, could be seen relaxing on the bench at the “Triangle” in the center of Dean Park.