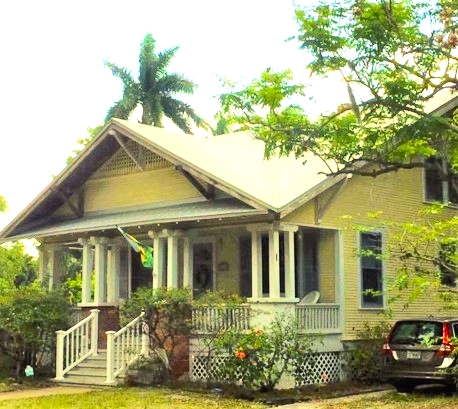 This frame bungalow was built for Neil Summers Storter and Betty Storter, who purchased the lot from Dean Development Company in March 1917 for $700, subject to a restriction that any house built there cost at least $1,500.  Land records show that Dean Development also gave them a mortgage loan to help them with this purchase, and Lee County tax records show the home was constructed by 1919.

However, it appears as Mr. Storter’s occupation as a steamship captain intervened with the couple’s future in Fort Myers.  On April 27, 1920, the Starters sold the home to Lee County Realty & Investment Company, and the 1920 census shows the couple had moved to Galveston, Texas.  They remained in the Galveston area for the rest of their lives, and records show Mr. Storter as president of the Galveston Propeller Club and very involved in the shipping business based in the Galveston area.

Meanwhile, back in Dean Park, the Florida real estate boom was exploding.  Lee County Realty wasted no time in re-selling this home to A.W. Davidson and Edith Roy Davidson in May 1920.  The Davidsons “flipped” the property again in June 1920, when they sold it to Clarence J. Webb.  Finally, the house had long-term residents:  Mr. Webb and his wife, Rachel, occupied this home until 1945, when they sold it to Kate Jeffcott.