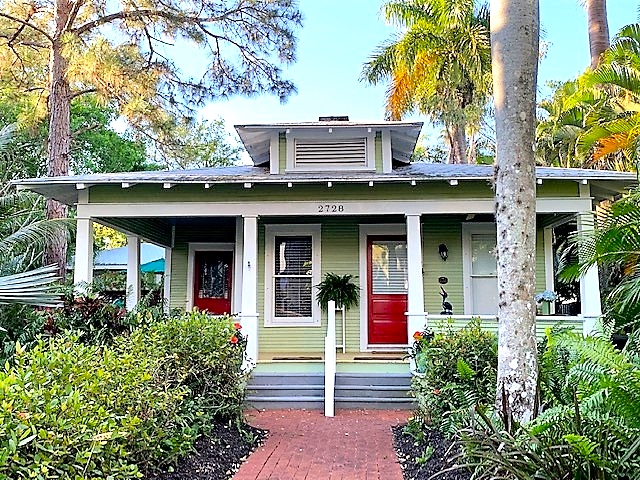 This one-story bungalow, with its wrap-around porch and attic dormer, is one of the first homes built in Dean Park.  It was first conveyed by the Dean Development Company to Kent T. Smith by a deed recorded on December 16, 1916, but this deed did not reference the Dean’s Subdivision map, which was not recorded until 1920.

Born in Nebraska in 1888, Mr. Smith was working with his father at a sawmill in Wisconsin, according to the 1910 census.  On June 24, 1912, he married Leila Reed, whose father was a truck farmer on Sanibel.  The News-Press article on their wedding pronounced Mr. Smith “a young man of sterling worth” and said the couple would be departing for Arkansas, where Mr. Smith would be going into business.

However, these plans were short-lived and, by 1914, Mr. Smith had returned to Fort Myers to become the general agent for the Kinzie Bros. Steamship Line, which transported produce, passengers and mail throughout the area, including excursions to Sanibel (75 cents round trip and 50 cents for dinner in 1912).  It is not known what brought Mr. Smith from Wisconsin to Fort Myers, although it is possible that he may have been visiting his father (who was a winter resident here by 1912) or visiting his brother (who was chief engineer for Kinzie Bros. by 1916).

On Dec. 18, 1916, the News-Press reported: “K.R. Smith has bought one of the beautiful lots in John M. Dean’s east side addition on Providence Street, east of M.F. Pixton’s Place.  Mr. Smith will at once begin the construction of a fine $2,000 bungalow on the lot.”

The Smiths resided on Providence Street until 1920, when they sold the home to A.W. Davidson.  However, they did remain in Fort Myers and Mr. Smith transitioned into a career as a bookkeeper and then established K.R. Smith Bookkeeping and Income Tax Service.  His avocation was serving as Manager for the Palm City baseball team, and the News-Press frequently quoted his enthusiastic remarks about the team.