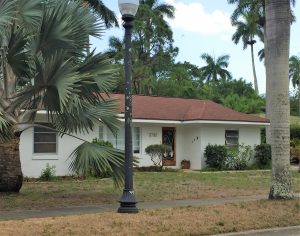 This ranch home was constructed for Sam M. Thomas and his wife, Kathryn, who purchased the parcel on January 26, 1946.  By the end of 1946, the home was completed, according to the Lee County tax records.

Like all parcels in Dean Park on the southerly side of Michigan Avenue, this parcel was purchased by The Carl F. Roberts Company in 1913, who purchased 46 lots in Evans Addition for a total price of $6,000.  The 1922 Sanborn Insurance Company map shows this as a vacant parcel.  In 1924, nine of these lots, including this property, was purchased by John M. Dean, the developer of Dean Park, with a $9,000 purchase money mortgage from The Carl F. Roberts Company.  Mr. Dean re-sold these parcels in 1925 to the Fort Myers Realty Company.

Sam Morgan Thomas was born in Kentucky in 1895 and grew up in Ohio.  He graduated as an electrical engineer from the University of Cincinnati then held a variety of jobs (printing business, radio salesman, electrical engineer) in the Cincinnati area. He and his first wife, Helene, had two daughters, both born in Ohio.

In 1929, Sam’s father, Joseph V. Thomas, began a furniture repair and refinishing business at 2802 Michigan Avenue in a building brought down from Sarasota on the Atlantic Coastline Railroad.  And, in fact, it was the old Sarasota old railroad freight depot.  From 1941-1948, Sam worked for the Army-Air Force an engineer in the photographic laboratory at Wright Field in Dayton, Ohio.  Then Sam and his second wife, Kathryn, decided to join Sam’s father in Fort Myers at Thomas Refinishing Shop; and Sam operated this refinishing business until his death in March 1980.  Kathryn continued to occupy this ranch home until selling it to its present owner, Perdé Williams, in 1988.