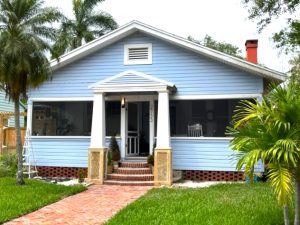 The “bones” of this modest three-bedroom bungalow remain intact.  However, its porch has been remodeled over the years, most recently in 2022.

On January 21, 1922, Dean Development Company transferred this parcel to John Dean’s United Construction Company, which is the step Dean customarily took when he planned to construct the house himself.  Because the completed house appears on the 1922 Sanborn Insurance Company map, its construction date can be set at 1922.

It appears that this house was originally rented to tenants, and the first known tenant was John Mitchell Barnes, as shown in the 1923 city directory.  Mr. Mitchell was a local boat captain who married Frances Capling, daughter of neighbor George Capling, just down the block at 2635 Michigan Avenue. In 1925, the city directory shows the tenants to be Hugh G. McLucas and Henry M. Land.

In April 1926, United Construction Company sold the house to Kate H. Coffey for $3,600; and Mrs. Coffey “flipped” it that September to Adolph & Cecile F. Grotta, who maintained their permanent residence in Philadelphia.  There is no evidence from Fort Myers city directories that they ever lived full-time on Fort Myers; and in 1929, they sold the bungalow to Title Investment Company, a corporation based in Fort Myers.