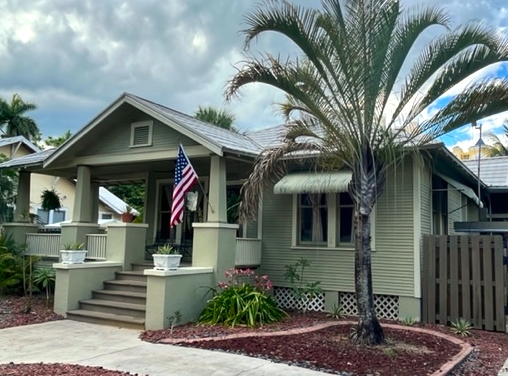 On January 31, 1922, Dean Development Company sold this lot to Nathaniel Stecher for $1,300, subject to a restriction that any home built there cost at least $4,000.  On August 11, 1922, the News-Press reported: “Another new home – it will cost $4,000 – is going up in Dean Park.  The dwelling will be of frame construction, narrow or ‘Dolly Varden’ siding being used . . . Last year, Mr. Stecher, who is an experienced builder, painter and decorator, built a stucco bungalow on Evan Avenue . . .”

By February 1923, the bungalow was constructed and offered for sale in the News-Press for a “very reasonable” price.  Perhaps it was not reasonable enough, because Mr. Stecher did not sell the bungalow until December 2, 1924, when he sold it to Ruth V. Larrabee.  Before selling the property, it was apparently leased to J.E. Kelly, a local realtor, whose name appears as the home’s occupant in the 1923 Fort Myers city directory.

Ruth V. Larrabee and her husband, Franklin C. Larrabee, moved to Fort Myers from Virginia in 1924, when Mr. Larrabee was about 40 years old.  Until that time, he had worked as a druggist in Elizabeth City, Virginia.  But when he arrived in Fort Myers, he began a real estate firm with office in the Post Office Arcade.  The Lee County land records reflect numerous real estate transactions, particularly for lots in “Green Acres” subdivision.  But by 1930, the real estate bubble had burst in Fort Myers and Mr. Larrabee returned to Newport News, Virginia, where he was a salesman for a wholesale drug company and then returned to the real estate business.