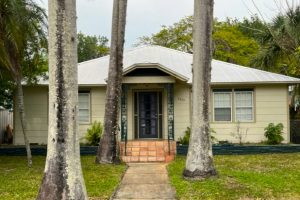 This one-story home is one of several residences built on Michigan Avenue in the 1940’s.  Its transitional style includes traditional double-hung windows, in grouping of three, and a centered front door with Craftsman-style brackets supporting the front door overhang.  At the same time, these elements are combined with features that foreshadow the ranch style:  the low-slung hipped roof and the modest front door.

Mr. Cool was born in 1884 Lake George, New York, and lived in the Syracuse area most of his life.  He did not come to Fort Myers until early 1946, when the Cools purchased a small bungalow nearby at 2721 Michigan Avenue on February 21, 1946.  After renovating and repainting that home, he sold it in August of that year.  Meanwhile he purchased this parcel on June 23, 1947, and promptly applied for the necessary building permit for construction of this new home.  By 1949, the the Cools decided to sell this home and move to the St. Petersburg area, where they lived until their deaths in 1965.