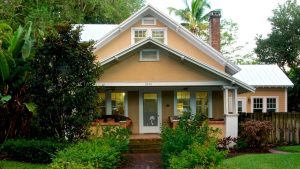 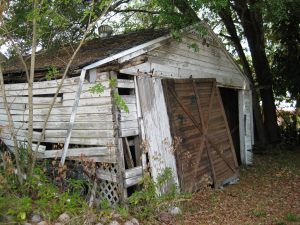 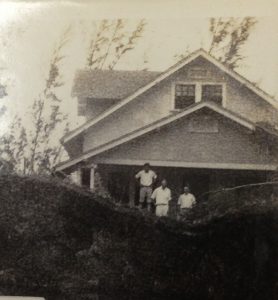 2740 Providence Street shown after hurricane of 1926, with fallen Australian pines in front.

This bungalow features a gable over the entire front porch – typical of many bungalows – and a second gable, recessed from the front porch, for the second floor.  Craftsman features include a quadruple-column design (also used across the street at 2727 Providence Street) flanking the expansive front porch and the double-hung windows with multiple panes on top and a single pan on the bottom.  The sunroom on the right side of the house is a 2015 addition, and the original garage constructed near the rear property line was demolished and replaced with a newer garage in 2012.

City tax records indicate the home was built in 1921, and it does appear on the 1922 Sanborn Insurance Company map.  Its first occupant was a tenant, Simon Loeb, who moved to Fort Myers from Mulberry, Florida, to open the Style Shop, on First Street in June 1922.  On August 14, 1924, Judge George W. Whitehurst purchased house from United Construction Company, which was the corporation John Morgan Dean used to construct homes in Dean Park.

George W. Whitehurst was a fourth-generation Floridian born in 1891 in Wauchula, Florida.  He attended the College of Law at the University of Florida and began the practice of law in his home town.  He served as a judge for 54 years, first as a County Judge of Desoto County, then as the youngest Florida Circuit Court Judge.  In 1950, Judge Whitehurst was named to the federal District Court by President Harry Truman.  The old federal courthouse in Fort Myers (now the Berne Center for the Arts) was named the George W. Whitehurst Federal Building.

Judge Whitehurst’s daughter, Marjorie Ann, was born in the house in 1925.  She still lives in Fort Myers and came back to visit the house in May 2017 after the News-Press ran an article identifying her father, who died in 1974, as the original owner.

The house is shown in a historic photo (available at the Southwest Florida Historical Society) taken shortly after the hurricane of 1926.  The photo shows Providence Street flooded and a tree toppled over in the front yard, with Judge Whitehurst and two friend sitting atop the fallen tree.  Later In 1926, Judge Whitehurst and his wife, Myra F. Whitehurst, sold the house to J. Bowers Campbell, the first of many subsequent owners.  Another owner was Archie N. Odom, also a judge in Fort Myers.  For many years (1954-1998), the house was owned by Minnie Alice Sanchez and her daughter, Ruth LeGault.