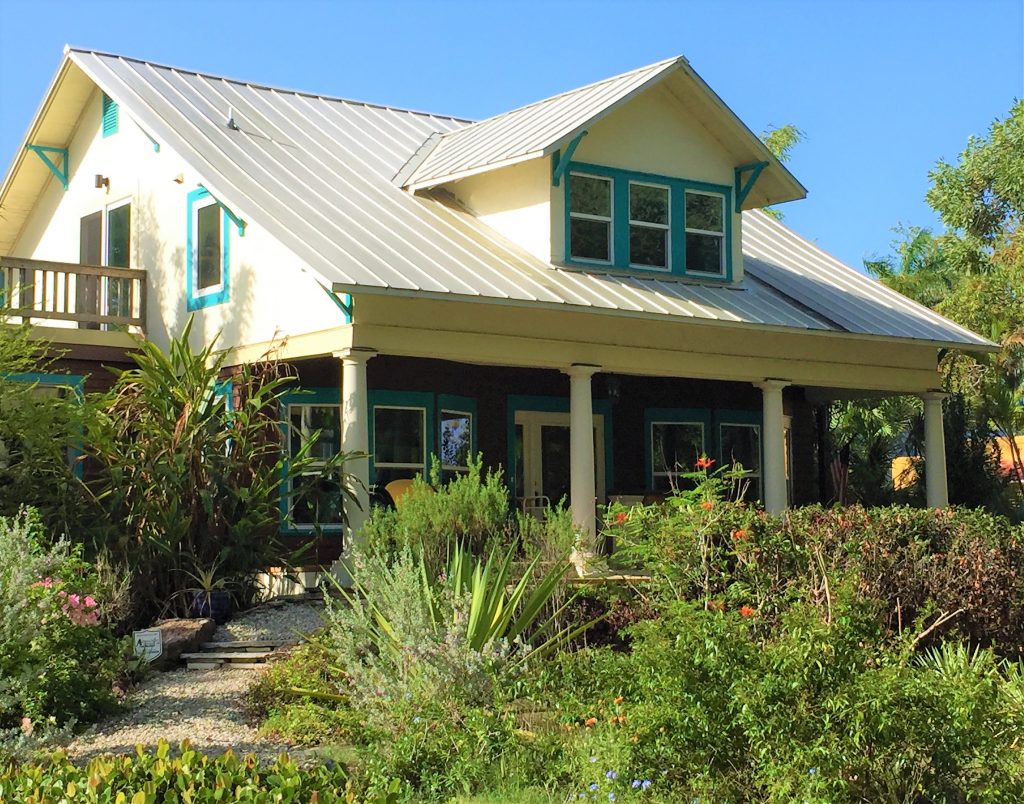 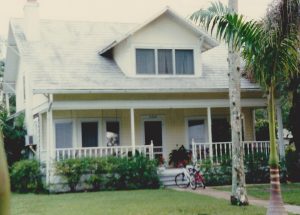 After this two-story bungalow was substantially damaged by fire several years ago, it was elevated approximately four feet on the site and enlarged by an addition on each side of the original bungalow footprint.

The original home was a more modest bungalow constructed by John Dean’s United Construction Company.  Although the City’s tax records state this home was built in 1915, it is more likely that the home was constructed shortly after December 1, 1920, when John Dean’s Dean Development Corporation transferred the property to his construction company, United Construction Company – a step that Dean customarily took when he intended to construct a house on the parcel.  The 1921 Fort Myers city directory does not show this house to be in existence in that year, and the dwelling appears for the first time on the 1922 Sanborn Insurance Company map.

The 1923 and 1925 city directories show “JR Parker” living at this address.  This was J. Rescoe Parker, apparently the first tenant.  However, he didn’t actually own the home until it was conveyed to him by United Construction Company on December 16, 1925, for a sales price of $8,000.   Mr. Parker then “flipped” the house and sold it on August 19, 1925, to Dr. Henry Elliott Parnell, who practiced as a physician and general surgeon in Fort Myers from 1915 through 1929.

Joseph Rescoe Parker and his wife Daisy came from Savannah, Georgia, to Fort Myers in the early 1920’s during the Florida building boom, and Mr. Parker promptly set up J.R. Parker Company, Inc. at 2122 Hendry Street to sell “Sporting Goods, Hardware and Builders’ Supplies,” according to the 1927 city directory.  By that date, the Parkers had also moved to a larger home on Riverside Drive.  With the collapse of the Florida building boom, the Parkers returned to Atlanta, Georgia, as shown in the 1932 directory for that city.

Dr. Henry E. Parnell was born in 1882 in Lake City in Columbia County, Florida.  In 1914, he married Ruby Louise Hendry, a Fort Myers native and the granddaughter of cattleman Francis A. Hendry, one of the early settlers of Fort Myers.

In 1917, Dr. Parnell enlisted in the Army and rose to the rank of captain in the Army Medical Corps.  In 1919, he returned to Fort Myers and resumed his medical practices, with offices in the Earnhardt Building, then in the Langford Building. Dr. Parnell also served on the City Commission from April 1924 through April 1927, then was elected as mayor.  He resigned abruptly as mayor in August 1927 after local banks refused to grant the City $75,000 in warrants to help with City with its financial shortfall at that time.

By 1929, the Parnells had moved to Everglades City, where Dr. Parnell continued his practice as a community physician.  On February 10, 1931, the News-Press reported that Dr. Parnell had accidentally shot himself in the hand during a hunting accident, requiring his left hand to be amputated.  Miami city directories show Dr. and Mrs. Parnell living in Miami in 1933 and thereafter, probably to be near their son, James E. Parnell, who also lived in Miami.  In 1952, at age 70, Dr. Parnell died and was buried in his native Lake City, and Mrs. Parnell died at age 74 in Miami.