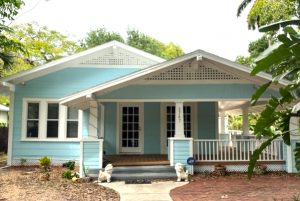 With two front gables, this bungalow also has the tapered columns and roof brackets are typical of the Craftsman style.  Its wrap-around porch offers a gracious location to relax in warm weather.  The interior fireplace is flanked by French doors, and the floors are Florida heart pine.  The home is virtually identical to its “twin” next door at 2759 Michigan Avenue, which was also built by Fort Myers developer Henry C. Case.

Born in 1886 to a farming family in Georgia, both Mr. Slappey and his parents later moved to Jacksonville, where he embarked on a series of sales jobs, first for Knight Crockery Company and then for Florida Paper Company.  He married Jennie Booth in 1914, and the couple moved to Tampa.

In 1923, the Slappeys moved to Fort Myers and Mr. Slappey bought a 50 percent interest in Schlossberg’s a “$5.00 Limit Store” in Fort Myers.  In the 1920’s, business at Schlossberg’s was booming and occupied a 3,500-square-foot store at the corner of Main Street and Patio de Leon before moving to an even larger space on the first floor of the Bradford Hotel building at 1026 First Street.  But by 1930, Schlossberg’s had gone bankrupt and Mr. Slappey moved back to Jacksonville, where he resumed his previous career as a commercial salesman for a paper company.