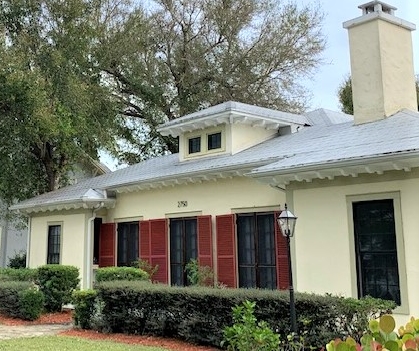 This eclectic home has a dramatic, windowed façade with many Craftsman details.  The large living room features high ceilings and exposed wooden beams that suggest the Spanish revival style.  The house is said to have been bequeathed by two elderly sisters to their postman, in thanks for his care and assistance for many years.

On November 26, 1923, the property was purchased by John M. Boring from the Dean Development Company for $1581.63, subject to a building restriction that any house built there must cost a minimum of $4,000.  Mr. Boring was both the Lee County tax assessor and a real estate investor for many years.

On August 9, 1924, Boring sold the house to Charles E. and Alice S. Staley for stated consideration of $10.  In late 1925, the Staleys decided to sell this home and purchase the smaller home next door at 2760 Rhode Island Avenue, a home they had leased during 1923.

Mr. Staley was born in Missouri in 1862, and Mrs. Staley had immigrated from England in 1867.  They raised their family in Indianapolis, where the 1910 city directory shows Mr. Staley to be “manager – automobiles.”  By 1921, the Staleys had relocated to Fort Myers, and the city directory of that years shows they initially resided at the Riverview Hotel.  Mr. Staley had also plunged into local civic activities and was serving as Chairman of the Board of County Commissioners, Secretary-Treasurer of the Fort Myers Merchants Association and Secretary-Treasurer of the Lee County Fair Association.  By 1923, Mr. Staley is City Manager, a position he held until 1928.

In 1925, the proposed construction of the Seaboard Railroad Terminal immediately to the east of Dean Park caused Mr. Staley, then City Manager, to speak in favor of the project in a half-page newspaper ad run December 3, 1925:  He stated he “sold his home in Dean Park without sacrificing it on account of the location of Seaboard terminals” and that he “called the attention of the buyer to the fact that the railroad was seeking to condemn the swamp property to the east of Dean Park, and the purchaser said he did not think the home would be damaged, and closed for it.”