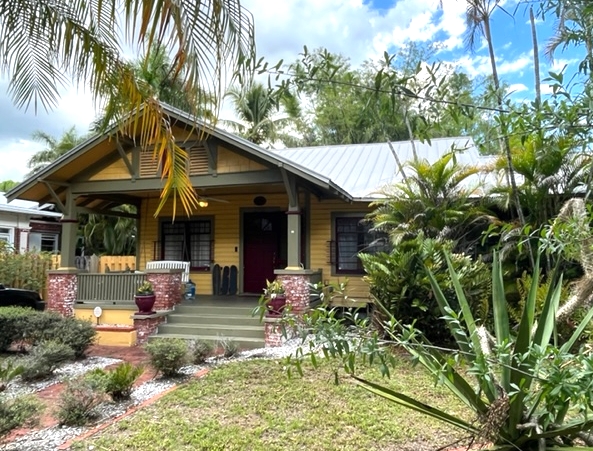 In 1921, John Dean’s United Construction Company conveyed this property to real estate developer Henry J. Case for $7,750 – a purchase price that signified a home had already been constructed on the lot.  The 1922 Sanborn Insurance Company map also shows a house located on this lot, and the 1923 Fort Myers city directory shows this home was occupied by Henry C. Case and his wife Ada.  On April 15, 1925, Mr. Case turned a nice profit and sold the house, along with an additional lot next door, to James B. Fleming for $14,000.

Mr. Case certainly saw the new Dean’s Subdivision as a profitable business model.  Between 1923 and 1925, he purchased 9 undeveloped lots from Dean Development Company at prices ranging from $750 to $1,600, then sold each property with a completed house.  Mr. Case was also fond of using his house plans on more than one house.  This house appears to be a “mirror image” of the bungalow located at 2775 Michigan, which was also constructed by Mr. Case.

Mr. Case was born in 1885 in Brattleboro, Vermont, and Ada Grier Case was born in Kansas.  But by 1910, both of their families were living in Estero, Florida, as part of the Koreshan Unity religious community.  The sect was founded in the 1870’s in New York by Cyrus Teed, who moved his followers to a community in Chicago in 1888.  In 1894, he began the Koreshan community in Estero, where he hoped to establish a utopian city.

Ada Grier Case was brought into the Koreshan movement as a young girl.  The 1900 Chicago census shows Ada (age 10), her brother (age 16) and their mother living in the Koreshan commune in Chicago with Cyrus Teed listed as “head” of the “family.”  Henry C. Case came to the Koreshan community in Estero with both his parents; and on May 1, 1910, the couple was married.

The Koreshan community dwindled after the death of Cyrus Teed in 1908, and Mr. Case elected to move to Fort Myers and focus on his business career.  The 1923 Fort Myers directory shows him as a “fruit shipper.”  In the 1925 directory, he is listed as manager of Floweree Groves, with a new home on McKinley Avenue.  In 1927, he is listed as Vice President of Builders’ Supply Company and manager of Floweree Groves, with Mrs. Case employed at the Palm City Brick and Tile Works.  By 1956, Mr. Case is President of the First Federal Savings & Loan Association even newer ranch home at 1326 Melaleuca Lane.