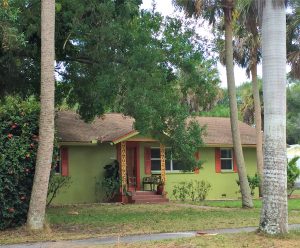 This ranch was constructed in 1960 for Fort Myers’ Fire Chief Floyd A. Shellabarger and his wife, Leo W. Shellabarger.  Typical of the ranch style, it features horizontal lines and a modest front door capped with an overhang supported by decorative wrought iron columns.

Like all parcels in Dean Park on the southerly side of Michigan Avenue, this parcel was purchased by The Carl F. Roberts Company in 1913, who purchased 46 lots in Evans Addition for a total price of $6,000.  In 1924, nine of these lots, including this property, were purchased by John M. Dean, the developer of Dean Park, with a $9,000 purchase money mortgage from The Carl F. Roberts Company.  Mr. Dean re-sold these parcels in 1924 to The Fort Myers Realty Company, subject to the Roberts mortgage.

This lot remained empty until the Shellabargers constructed a new ranch home on the parcel and moved here from their home just one block away on Second Street.  Mr. Shellabarger was born in 1910 in Oregon to Delbert and Bertha Shellagarger, who had moved west to North Dakota in time to be counted in the 1900 census, then to Portland, Oregon, for the 1910 census.

By 1926, the family had relocated to Fort Myers.  Floyd, just 16, volunteered at the Fort Myers Fire Department and opened Modern Dry Cleaners on Hendry Street.  By 1931, he was a full-time Fire Department employee and a remained one until his retirement in 1970, with the exception of his service in the U.S. Navy during World War II.  His Fire Department career was capped by his appointment as Chief in 1966.

Mrs. Leo Virginia Shellabarger was a Texas native who came to Fort Myers in 1939 and worked as a stenographer for the State of Florida.  The Shellabargers were married in 1944.  They lived at this home from 1960 until Mrs. Shellabarger’s death in 1973, and Mr. Shellagarger still owned the home when he passed away in 1995 at age 84.