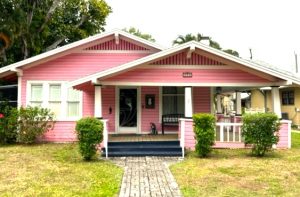 This is one of at least six bungalows constructed on Michigan Avenue by Fort Myers developer Henry C. Case.  It is virtually identical to the bungalow constructed next door at 2747 Michigan Avenue, both having double front gables and a wrap-around front porch.

In March 1924, H.C. Case purchased this parcel from Dean Development Company for $1,200, subject to a restriction that a house costing at least $3,500 be built on the parcel.  After constructing the bungalow on the premises, Mr. Case sold it to Charles L. Greer and Lee Virginia Greer later that year for the purchase price of $5,350.   The parcel was expanded on in 1926, when the Greers purchased the easterly half of Lot 19 from their next-door neighbor, Reuben Slappey.

Mr. Greer was a Texas native to came to Fort Myers sometime prior to 1915, when the city directory shows him working as manager of Cash Grocery Store.  His wife, Roberta Lee Webb Greer, came to Fort Myers at age 16, along with her parents, George and Lula Webb of Kentucky.  Mr. Greer worked in the grocery business throughout his life, and the News-Press shows Mrs. Greer as one of the members of the Dean Park Garden Club.  The Greers and their next-door neighbors, the Slappeys, were friends and the News-Press reported on May 8, 1924:

“R.R. Slappey and family, and Mr. and Mrs. Charles L. Greer, motored to Fisheating Creek Thursday morning where they spent the day fishing in the placid waters of that stream, noted as the home of hungry black bass.  It is to be hoped that they had good luck.”

Sadly, on April 7, 1930, the property was sold for $3,000 at a foreclosure sale.  The Greers remained in Fort Myers and and Mr. Greer continued his career in the grocery business – engaging in some real estate business on the side – until his death in 1951 and Mrs. Greers death in 1959.

Dean’s Subdivision, Block I, Lot 20 and easterly half of Lot 19.