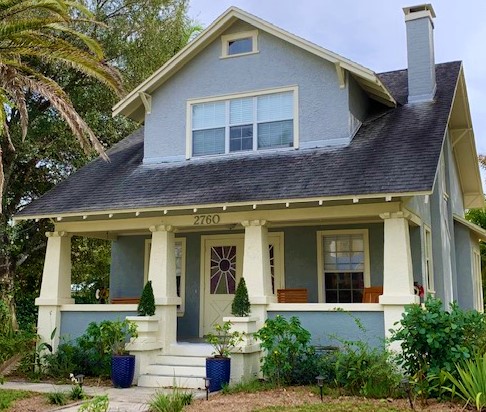 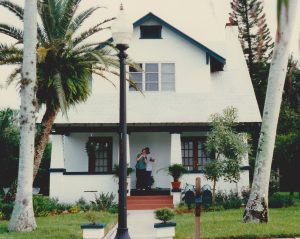 In 1996, as shown in the photo above, this bungalow includes classic Craftsman-style features:  an expansive front porch with tapered columns, a center second-floor gable tucked into the pressed metal tin roof.  The original door, at left, has been replaced by dual stained glass doors at the center of the porch.

On December 1, 1920, this lot was conveyed from Dean Development Company to United Construction Company – a procedure usually followed by John Dean when he intended to have his own United Construction Company build the home on the premises.  And this seems to be what occurred, since City tax records show the house was constructed in 1921. Further, the house appears on the 1922 Sanborn Insurance Company map.

The 1923 Fort Myers city directory shows this home to be occupied by C.P. Staley (Charles Plummer Staley), who served as City Manager until 1928.  He appears to have leased this property during the beginning of his tenure as City Manager, then purchased the house next door at 2750 Rhode Island Avenue on August 9, 1924.  However, in 1925, Mr. and Mrs. Staley sold the 2750 Rhode Island property and moved back to this home, which they purchased on January 15, 1926, from United Construction Company for $7,500.

Mr. Staley was born in Missouri in 1862, and Mrs. Staley had immigrated from England in 1867.  They raised their family in Indianapolis, where the 1910 city directory shows Mr. Staley to be “manager – automobiles.”  By 1921, the Staleys had relocated to Fort Myers, and the city directory of that years shows they initially resided at the Riverview Hotel.  Mr. Staley had also plunged into local civic activities and was serving as Chairman of the Board of County Commissioners, Secretary-Treasurer of the Fort Myers Merchants Association and Secretary-Treasurer of the Lee County Fair Association.  By 1923, Mr. Staley is City Manager, a position he held until he retired in 1928 at age 66.  Mr. Staley remained active in local political and business affairs; and the Staleys also continued live at this home until Mr. Staley’s death in 1942 at age 80 and until shortly before Mrs. Staley’s death in 1955 at age 87.