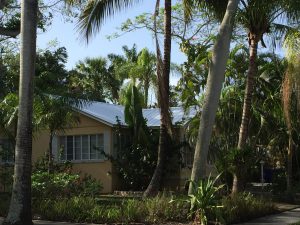 This stucco cottage appears to represent a transitional period between the Florida bungalow and the Florida ranch.  Built in 1945, it has the trim lines and front picture window of a ranch.  At the same time, it has the wide eaves, paned windows and small one-story profile of a bungalow, perhaps because it was built on a narrow parcel (the easterly 60 feet of Lot 13 in Block H of Dean’s Subdivision).

On October 10, 1923, Dean Development Company sold this parcel to Fort Myers developer Henry C. Case for $750, with the restriction that no house costing less than $4,000 be built on the property.  In 1925, Mr. Case sold this parcel, along with Lot 12 next door, to James B. Fleming and Anne Lee Cralle Fleming of Virginia.  The Flemings built their bungalow next door at 2755 Providence Street and later split off this lot and sold it to Lawson B. Jones and Lucile Y. Jones in May 1944.

Lawson B. Jones, a native of Georgia, married his wife Lucile in Lee County in 1936.  He worked as a bookkeeper for various businesses in the Fort Myers area until he registered for the draft in 1942.  He served in the Navy in World War II, then returned to Fort Myers.  In 1947, the Joneses sold this home to Lisle and Elizabeth Hart of Cleveland, Ohio.  The Jones later moved to Tampa and then to Oregon, where Mrs. Jones died in 1985 and Mr. Jones died in 2003 at age 99.