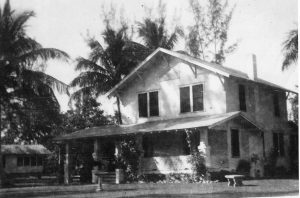 This two-story home combines many Craftsman details — such as its massive porch columns, wide roof eaves and roof brackets – and the influence of the “American Foursquare” style.  The American Foursquare is a classic two-story American design that lives up to its name:  it is perfectly square as seen from the street and often had four rooms on each floor, two on each side of a center hall.

Joseph Walton Hill was born in 1870 in Birmingham, England, and immigrated to the United States in 1888.  By the 1910 census, Mr. Hill was working in Fort Myers as a machinist and living on Fowler Street with his bride, Flora, born in Alabama and 18 years his junior.  Mr. Hill was said to be a member of the Trail Blazers, famous for motoring across the swamp in 1923.  And this is reflected in a clipping from theNews-Press, which announced on May 19, 1917:   “Joseph W. Hill and family will leave tomorrow by automobile for points in Rhode Island planning to be away about six weeks.”

In 1920, the Hills contracted for this substantial home to constructed on the parcel, and they lived there until 1933, when the depression appears to have caught up with them.  On January 24, 1933, the Hills conveyed the home back to the First National Bank of Fort Myers, in consideration for satisfaction of their mortgage loan from the bank.  Mr. and Mrs. Hill and their two children continued to live in Fort Myers, with Mr. Hills always working as a skilled machinist.  Mrs. Hill, a native of Alabama, died in 1952 and Mr. Hill died in 1957.